Cooking & The Lost Art of the Mix Tape

Posted on February 21, 2011 by dontfearthevegan

Shortly after moving to the lovely Pacific NW I discovered a treasure trove of music available at the socialistic state enterprise known as the King County Public Library.  They have all sorts of stuff there and its all free (as long as you return it on time).  Being the latte quaffing, tree huggin’, west coast liberal elitist, lookin’ for a handout, friend of Dorothy that I am, I knew I had to take advantage of this windfall opportunity of copyright infringement fair use to add to our already immense collection, before the Ayn Rand-ers cut services to levels rivaling Borat’s hometown.

Dumping mass amounts of music into the hard drive without vetting it before droppin’ into shuffle mode can be an audio fun house.   Hidden and long forgotten gems pop up regularly like long lost friends and more than a few times I’ve found an appreciation of things I’ve heard 40 years but never gotten into before.  Sometime it’s something I never heard before and sometimes it’s just complete crap.  I live with 2 girls so the collection has stuff like “Cats” and freekin’ Jewel in it,  so it’s bound to happen.  As I am editing  this for posting the PS3 has graced me with Billy Bragg, Pearl Jam, Joe Jackson, The Kinks, RHCP, ABC, Van Halen (the real VH, no offense Sammy), Joy Division, Lou Reed, Rush & Rehab.   Not a bad run, kinda stuck in the past…..

The other night I was bangin’ out some dindin in the kitchen while her Sassy-ness was pickin’ up the ninja from martial arts.  That’s 30 minutes where I can blast whatever I damn well please without being asked to turn it down or have to deny a request for Die Antwoord.  Don’t get me wrong, I like Die Antwoord more than a guy my age should, but even worse, my 6 year old likes them a lot more than a kid her age should. Does that make me a bad dad?  I’m not sure.  At least there’s zero chance she’ll come down with the Beiber Fever.  On a side note I would love to see/hear all the kids at martial arts scream ‘I’m a M*therf*cking Ninja” but I don’t think the Masters will let that happen.

Anyways, as the Playstation was cranking its way randomly through the 24K songs living in its innards, and batting @ 70% with 5% chance of W.T.F.,  it occurred to me that shuffle mode is a lazy ass way of listening to music.  It’s not like cooking, where ingredients need to be chosen, measured and processed in specific order* much like the perfect mix tape.  Which got me thinkin’,  do I still have the DJ skills to crank out a concise 60-ish minutes that covers the highlights of what I’ve been groovin’ to these past couple years while I’ve been working on my chops in the kitchen?  I guess we’re going to find out.

I got a spindle of blank CD’s and I’ll burn a copy of  ‘Cookin’ with Fire – Vol. I’ (explicit version, nsfw) for anybody who’ll send a self addressed stamped envelope.  If your feelin’ frugal or creative, you can skip the return stamp and send us a CD of your own instead.  We at DFV haven’t gotten around to getting a PO Box, so drop a line in the comments section on Facebook and I’ll send you the address.   Yes it’s a trick ’cause you have to “Like” the page before you can leave a message, heehee.

I’ll include my current favorite song, which I recently found out has the un-official subtitle ‘The Wake & Bake Song’ which explains a lot.  On that note, here is an awesomely easy way to dress up plain oatmeal to impress on those lazy mornings when you got nothin’ to do and no place to be.

Prepare the oatmeal as directed but substitute half the water with apple juice.  Peel and slice apples into medium sized pieces, add to the mixture as you bring the liquid to a boil.  Stir in brown sugar to taste, dust with cinnamon.  Serve with Mimosas & the local newspaper. 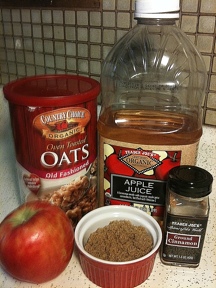 I am not adding a pic of the finished product ’cause I don’t have the skills to make oatmeal look good.

* except for the chili recipe from a couple of weeks ago, you can throw that thing together in whatever order you like.

This entry was posted in Felipe's corner. Bookmark the permalink.

2 Responses to Cooking & The Lost Art of the Mix Tape