Posted on October 4, 2012 by dontfearthevegan 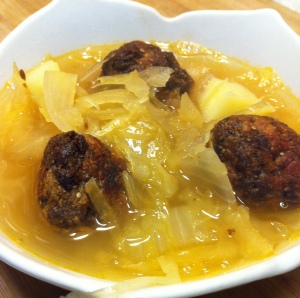 So our little vegan loves Sauerkraut and I tend to look for recipe ideas that include ingredients she likes in hopes that she will be less reluctant to try the finished product. When I saw this Czech Sauerkraut Soup last year during Vegan MOFO from a Czech Vegan (in America) I knew I had to try it. I have never had a sauerkraut soup but it looked and sounded great!

I made a few changes to the original recipe:

1. In the original recipe it was mentioned that to make it more authentic it should be eaten with rye bread and that you could add your favorite vegan sausage. I opted to combine the two suggestions and made vegan sausage and rye balls. Hubby says they are his favorite meatless balls ever and they were so easy! Recipe Below.

2. Instead of using more oil I sautéed my onions in the oil I cooked the balls in.

3. I didn’t have vegetable broth so I used water and 1 tsp of Better than Bouillon No Beef Base.

4. I used three cups of sauerkraut instead of two because that is what came in my jar.

Mix the chia seeds and water and set aside for 15 minutes.

Cut or tear the toast into small pieces. In a large bowl mix Sausage, chia mixture and toast with your hands. Roll mixture into balls. We were having too much fun and forgot to measure but ours were bigger than bite size.

In the pot that you plan on making the soup in heat up oil (enough to cover the bottom) on medium heat. Cook balls in oil until lightly browned. Add more oil if needed. Place balls on cookie sheet covered with parchment paper. Set aside.

Fry onions for soup in left over oil. Scraps from the balls are okay, they will add flavor.

Preheat oven to 375 degrees. Bake balls for 30 minutes turning half way through. I put my balls in the oven when I added the potatoes to the soup.

Thanks Czech Vegan! My house smells amazing right now  and the little vegan loved it!

Gallery | This entry was posted in An Ode to Vegan Bloggers MOFO 2012, soup. Bookmark the permalink.

11 Responses to Sauerkraut Soup and Czech Vegan (in America)