NFL Football is for Pansies

Posted on February 2, 2011 by dontfearthevegan 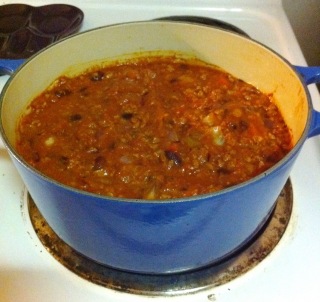 Yeah I said it.  Many friends of DFV are big fans of their hometown teams and that’s cool, urban tribalism, I get it, but the game itself is a WANK and the players are even BIGGER WANKERS.  These guys have have conned the world into believing that their sport is the roughest and they are the toughest, so much so that it warrants those big paychecks. Read on before the NFL faithful among you deluge the comments section defending your love of the sport and it’s players …..like we have enough readers to deluge anything……

The players wear more armor than the Master Chief from Halo, albeit without all the weaponry.  I’m aware that the force created by 2 teams of steroid pumped behemoths bashing into each other is comparable with the force created in an all-male bull elephant rut, (maybe an all-male bear rut is a more apt comparison) but I ask you: have you ever seen a Sumo wrestler wearing enough padding to survive a nuclear strike?  Hell no! And these guys go belly-belly like 2 walruses fightin’ for some hot lady walrus lovin’.  Not only that, the average sumo wrestler weighs at least 50 lbs more than the average NFL player, and if I remember my HS physics; mass x acceleration = force, meaning sumo wrestlers hit each other with more force than NFL players do and they do it without helmets.  If Sumo doesn’t seem tough enough there is always rugby…

But that’s not even my biggest gripe with pro football.  For a longtime now I’ve wondered out of the 60 minutes the game clock is ticking, how much time is the ball actually in play?  Of course I never cared enough to sit down with a stopwatch to time it myself.  Hell, I can’t force myself to sit and just watch something as mind-numbingly dull as a football game until the playoffs.  Fortunately for your pajama clad blogger, the Wall Street Journal did the heavy lifting for me.   The results were exactly what I expected and you fans are not gonna be happy about it:


During an NFL game the ball is in play for an average of 11 minutes .

Think about that: 11 minutes, less than 20% of the time the game clock is running.   For all you Bears fans talkin’ trash on the Facebook a couple of weeks ago, that means you probably spent more time on your posts than Jay Cutler & the Bears’ offense spent choking on Lambeau Field.  I warned you guys not to get too worked up over beating a bunch a losers like the Seahawks the week before but ya’ didn’t listen did ya?

Does anybody reading this get paid to work only 20% of the time you’re on the clock?  I didn’t think so.  But they practice their asses off you say, to which I can only respond ‘so what’.  Does anybody reading this get paid to ‘practice’ their job?  The Sassy one doesn’t ‘practice’ managing her store, she ‘manages’, 10 hours a day 5 days week, not just for 5 minutes one day a week.  I am sure most of you are in the same position,  but wait, there’s more!

Now you’re probably asking yourself “Okay Felipe I’ve read your half-baked take on American football but WTF does this have to do with cooking?” That is a damn fine question and I assure you these observations are fully baked.  This weekend’s wack-tacular Superbowl is gonna dominate Sunday, though the game is only 11 minutes long.  So what are we the masses going to be doing the other 3 hours & 49 minutes while the players are playing grab-ass & deciding how to spend the extra $43K – $83K they’re getting just for showing up and the talking heads fill the airwaves with inanity?   We’re eating and drinking of course, because something has gotta distract us from endless repetition of instant replays and whatever dinosaur rock band the NFL has lured out of retirement for an extra 15 minutes of fame, literally.

(I’ve just read the half-time act is the Black Eyed Peas, f*ck me I hate BEP.  I guess we can turn the volume down and hope Fergie has a wardrobe malfunction.  At least they’re Americans and they’ve had a hit this century but if that was the criteria this or this would have been much much better.)

Knowing what we just learned about how much actual playing goes on the field, I’ve decided I’m not spending anymore time preparing food for Super Time Suck Sunday than the game is actually going to last.  It’s simple economics and I’m gonna get my 11 minutes of work outta the way early so I can spend the rest of the day drinking to forget I’ve wasted a perfectly good Sunday watching over-sized, over-paid wankers play a child’s game.

In-between all the cool commercials that is.

Felipe’s Vegan Chili
Cooking Oil
1 Large Onion
1 Package Soy Chorizo
Couple of Peppers of (your choice)
Couple Cloves of Garlic2 Jars Arrabiatti Sauce
1 Can of Beans, your choice
1 Can Diced Chilies
Cumin
Chili Powder
Hot Sauce(s) (whatever you have in the cupboard will work) 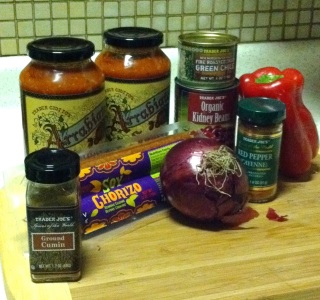 Cut onion, garlic & peppers into med/large pieces, saute in heavy pot with oil.  Add everything else to the pot except the spices.  Stir together and taste.  Add spices and hot sauce(s) to your preferred level on the Scoville Scale, simmer over low heat until you’re ready to eat.  Drink a beer if you haven’t already.  Don’t drive.