Posted on October 6, 2012 by dontfearthevegan

My parents are in town to watch the little vegan tonight so Hubby and I can go to my company party. As a thanks we decided to make sushi for them last night. My mom has issues with iodine so we decided to make something else to go along with the sushi. I wanted something simple to make since the sushi is so labor intensive.

On the blog Kirsten’s Kitchen I found a winner: Simple Udon Noodles.  I know many people who are uncomfortable following recipes unless they have all the ingredients. This is a great example of using what you have and simply using the recipe as a guide. I followed Kristen’s directions but used what I had in the house (Gardien Chickenless strips, onions, garlic, asparagus carrots, snap peas and green beans.) I meant to add the sesame seeds but forgot. I also wanted a little more broth so I added a cup of water and a teaspoon of bouillon. Let recipes guide you to fill your needs!

Kind of off topic but I have to share. Many years ago I had a once in a lifetime opportunity and had a paid trip to Japan. I have been fortunate to travel to quite a few places and hands down Tokyo is one of the most interesting cities I have ever been to. One of the culinary highlights of the trip was a Wasabi Leaf salad. I have tasted this salad in many of my dreams and have actually spoke to some sushi chefs in the states about it, all of who have heard of it but never tried it. They all have agreed that is a rare, expensive find. At the time I ate it I had no idea. 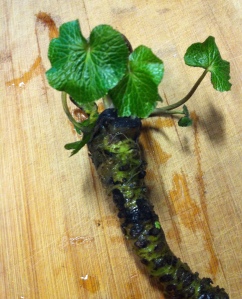 Yesterday when I was shopping at our local Asian market I found fresh wasabi and the root actually had the leaves on it. It cost a mere $70 a pound and the little piece I bought was $8. I planned on adding the leaves to one of the sushi rolls but I couldn’t bring myself to use them, though we did grate some of the root to try, and it has a great fresh flavor completely different from the wasabi powder we know. The root is now soaking in cold water until I figure out what to do with it. Any ideas?

Sorry for all the dark photos. Dinner was finished late and I just couldn’t get the lighting right.

Gallery | This entry was posted in An Ode to Vegan Bloggers MOFO 2012, Main Course. Bookmark the permalink.