Posted on March 23, 2011 by dontfearthevegan 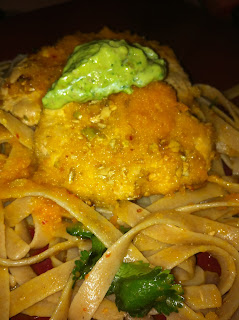 I read at a minimum of two cookbooks a week and when I try to go to sleep my mind is busy putting together recipe ideas.  Sometimes the ideas are complete failures either due to taste or the inability to execute.  Fortunately more often than not they are a success like this evenings dish.
Tonight my cravings consisted of pasta, bread and Mexican food and I knew I would not be satisfied without all three, hence this seemingly odd combination.  Please try not to let the combo of pasta combined with a Mexican flair scare you for the outcome is indeed tasty.
Some other notes. The fettuccine had quite a bite so if you prefer a slightly milder outcome you may want to cut back on the amount of red pepper in the Lime Marinade. I am allergic to avocados so I made a pea guacamole which is tasty and I included the recipe for, though I think guacamole would go great as a substitute. For the Pepper-Vinegar Sauce I used an orange bell pepper but I think esthetically a red would look better.  The little vegan does not like anything with spice so I did not marinade her Gardein but breaded it with the Pepita breading and she loved it.

This recipe is a filling meal for two adults and will take approximately one hour to make.

Mix ingredients from water to shallots. Pour over Gardein filets and let marinade for 30 minutes.

While filets are marinating cook fettuccine according to directions.  When cooked, drain, rinse in cool water and set aside.  When you are almost ready to serve put leftover Lime Marinade in the pot that you cooked pasta in and add cumin.  Heat over low heat.  Add pasta into the marinade.  Stir in nutritional yeast.  Just before serving toss in cilantro so it wilts slightly.

Over medium heat saute shallot, garlic, and bell pepper in oil until bell pepper is tender.  Add vinegar, sugar, pepper flakes and salt.  Cook until sugar is dissolved.  Put all ingredients in a blender and blend until a smooth sauce.  Put sauce in sauce pan and simmer until ready to serve.

Mash pepitas and then mix with bread crumbs. Heat oil in a frying pan.  Dip filets into breading so well covered on both sides.  Fry in pan until golden brown on both sides.  To serve place filet on top of lime fettuccine.  Cover with Pepper -Vinegar Sauce and top with a generous spoonful of your favorite guacamole.

Combine all ingredients in a mini food processor or blender. Allow to sit for at least 10 minutes before serving.

This entry was posted in Gardein, Main Course. Bookmark the permalink.