Posted on March 6, 2011 by dontfearthevegan 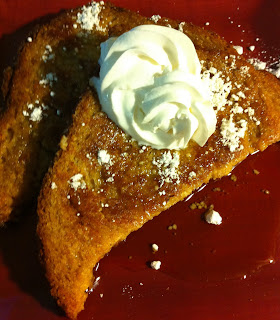 Oh how something so simple can make me so happy!  Simple that is until you go vegan.  I have found a great French Toast at a local restaurant called the Wayward Vegan Cafe, but it has been one of those things that I have attempted to recreate for a long time running into a batter that tasted like soy or not thick enough or too thick. I just couldn’t seem to get it right and since we try to limit our eating out spending, it is something I don’t get very often.  That is until now.  Thanks to my Mom.  Knowing my dilemma she started doing her own research and came up with this little gem (sorry Mom I changed it slightly.)  The trick is the cashew cream.  I know, I am late getting on this bandwagon but the little vegan and I attempted to make cashew sour cream which we had to throw away because of it’s pure awfulness, and since then I have been afraid to try anything cashew creamy.  I fear cashew’s no longer and I think you will start to see more of their greatness in recipes to come. Hey, what do you expect, I have left over cashew cream that I need to use!

So Mom’s original recipe had half the cinnamon, no nutmeg, 1/16 tsp tumeric & 1/2 tsp vanilla.  I went with my favorite old school ingredients.  When I cook breakfast I like everyone to be able to eat together so I preheat my oven to 200 degrees and let the finish slices sit in the oven to keep warm until everything else is done.
Mix all ingredients together in a blender and pour into a bowl that you can dip the bread in. Cover the bread with mix and cook in a non stick skillet until brown on both sides.  I used vegan butter to cook mine in, Mom didn’t.  Serve the way you like French Toast the best!

*In case you haven’t made cashew cream before it’s pretty simple.  1 lb of raw cashews.  I soaked in cold water over night in the fridge.  My mom soaks hers in warm (not hot) water for 15-30 minutes.  I also read some recipes where they didn’t soak at all.  Rinse and put in blender.  I wanted mine thicker so I added water just to the top.  If you want it less thick go an inch above the cashews with the water.  Blend until smooth (will be slightly grainy.)  I have a Vita Mix and have read that if you don’t have one you may have to strain out some chunks.  It will refrigerate for up to a week.  Makes 5 cups.