Posted on September 2, 2013 by dontfearthevegan

I am one of those people who gets a wild hair and can’t rest until I act on it. Sometimes this leads to terrible consequences.  Other times, like today, the end result is fantastic.

On July 29th I moved to Salem, Oregon for work. Hubby and Anzia stayed behind to finish out the summer in our little bungalow on Lake Washington in Seattle. On Wednesday Anzia takes off on her first big flight alone to visit family in Florida. Initially, I had planned on going to visit before she left, but due to work meetings I didn’t have a normal weekend. Yesterday I decided that even though I only had one day off I was going to make the 250 mile commute to give my kid a hug goodbye, hubby kisses and just some family time which included going out to eat.

In order to not blow my personal MOFO challenge on the second day and to stick with the theme, “Dad Says It’s Toxic,” I talked everyone into going to Thrive, where they have many raw options. Since much-needed family time took away from kitchen time I took pictures of our food and decided to talk about them. I have decided I am going to create my own version of all of these over the next 30 days. My apologies for the quality of the pics.

First up were the pesto stuffed mushrooms that had been placed in the dehydrator to warm. I had these before and attempted to make these before but it was a terrible fail.

Next up were the Ninja Nori Rolls with a nut ocean pate and a cilantro dipping sauce.

Lastly, and our favorite of the day was an appetizer that I neglected to get the name of, but it was basically a build your own thai taco using cashews, ginger, red onion, jalapeno, cilantro, limes, and coconut on a pepper leaf with a thai lemon grass sauce. It was one of the most unique, flavorful taste sensations I have experienced in a long time. Unfortunately, the owner Monika said it was being taken off the menu but it would be featured as a special. If anyone knows the name of this dish, please share. 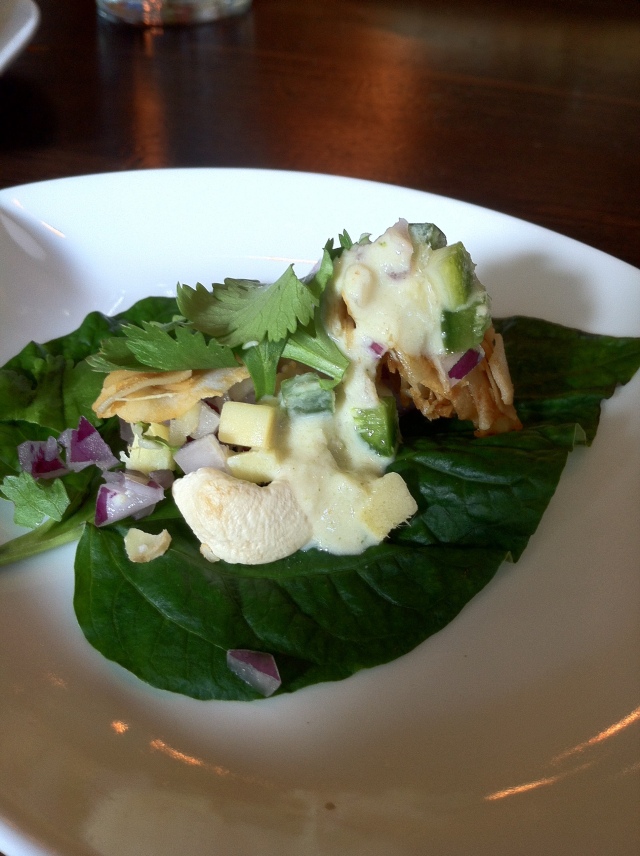 This entry was posted in MOFO 2013: Dad Says It's Toxic. Bookmark the permalink.