Posted on October 19, 2012 by dontfearthevegan

My love for shopping for all things food related has been mentioned before. This hobby has gotten the better of my kitchen cupboards which led to me being forced last weekend to empty out my pantries in order to find an ingredient I needed. During this organizational frenzy I found that I had accumulated quite a collection of different varieties of rice. The funny thing is I hardly ever cook with rice though I obviously find it interesting to buy. This began my search for rice recipes.

Are you familiar with the blog Vegan Richa formerly known as Hobby and More? She is one of the first blogs I followed when I began blogging. I had intended to write about her blog during this month but wasn’t sure when, so today is as good as any other day. Her pictures are beautifully styled and her recipes always look and sound tasty. I love Indian food but have done very little experimenting with it and her recipes make it seem not so difficult.

Tonight I decided to make her Biryani recipe with a few changes based on what I already had at home. I also had a mix of mushrooms and heirloom tomatoes that needed to be used so I added a layer. The little vegan made her own not spicy version which I will also share. I followed most of Richa’s steps completely and am only noting my changes in this post. To make the dish go here for directions and the full list of ingredients. 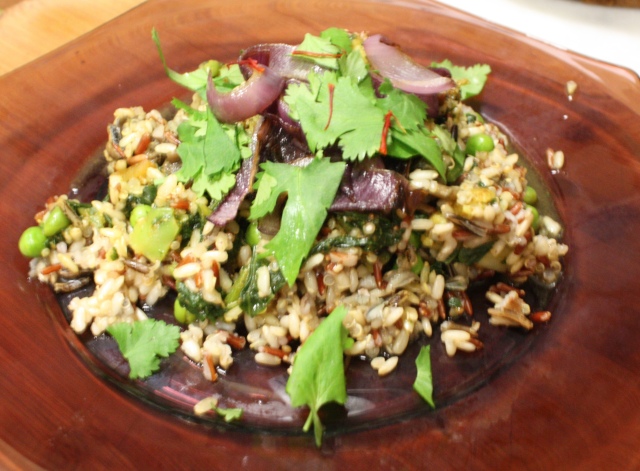 Rice
I used a quinoa rice blend instead and increased the recipe by half to have enough for the little vegans.

Garnish
I only had red onion, cilantro and saffron. I also used all of the red onion.

Vegetables
I used all frozen veggies (peas, cauliflower, carrots, zucchini, broccoli, and kale) because I haven’t been shopping.

I also did not do the cashew step.

Melt coconut oil in a pan and add garlic. saute over medium for 3 minutes. Add remaining ingredients. Cook for 15 minutes. Set aside.

This entry was posted in An Ode to Vegan Bloggers MOFO 2012, Main Course. Bookmark the permalink.