It’s Been A Year

Posted on January 1, 2012 by dontfearthevegan

Until early 2011 I had never thought about writing a blog much less read any blogs aside from the one my sister did to keep the family up to date on her kids adventures. Last holiday season I had begun baking for people at work, many of whom where scared of just the idea of vegan food.  As more people tried my cakes I was getting more request for recipes and I figured posting recipes would be a great way to share with family and friends. We were also in the process of setting things in motion to get our line of seitan on the market and I figured it would be a great way to keep people informed about that. I had started a different blog where I posted recipes but then decided to revamp it and change the name on January 1, 2011, a year ago today.

The internet is an amazing place.  My  family is still astonished at how this little blog has taken off.  We now have followers on every continent except Antarctica and are still making new friends weekly. Plus by meeting people in this great, big vegan world-wide web we have been able to a part of some pretty cool things like: Meatout 2011, a weekend blog read and guest writer for Vegan Mofo at Vegan Mainstream, and Vegan Mofo which were all awesome experiences. We also had the opportunity to give away a few things like aprons, t-shirts and canvas bags!

As for the seitan…we had a friend who showed interest in giving us funding to launch the company. After negotiations we decided that it would be better to do it on our on which also meant a much slower process. We are getting everything lined up to give out mass samples (sorry, we will only have the means to do so in the Seattle area) and launch a Kickstarter campaign this month (being as I work a full-time job the time line will be based on how much help I can get from hubby.)

This year with the blog I plan on at the minimum of a recipe a week. We still have so many questions and new ones are added frequently which will make it easy to continue with Vegans Say What. There are constantly new things to share for the Worthy of Sharing spot so if you find something cool make sure to let us know. I also am going to try to highlight at least on recipe from another blog a month. 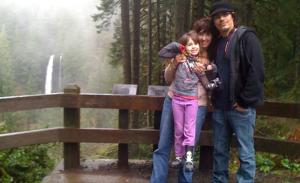