Posted on November 6, 2011 by dontfearthevegan

Since posting my last cinnamon roll recipe on Vegan Mainstream for MOFO I had thought about making a pumpkin cinnamon roll but then Seth at Geek To Nature did it for me. I was considering making them yesterday but then as I was sharing a glass of soy nog with my daughter and reminiscing about the nog cake I made last year (which I will be re-making to post sometime in the next month) it occurred to me that Rum Nog Rolls would be most excellent!

Notes:
*These are great with out the addition of rum ( I made an end sans rum.)
*This icing is runny and gooey which I love. If you prefer thicker icing add more cream cheese and butter in equal amounts.
*I usually use brown sugar for cinnamon rolls but was out and way to lazy to go to the store so I used what we had.  Honestly I couldn’t tell the difference so use which ever you prefer. 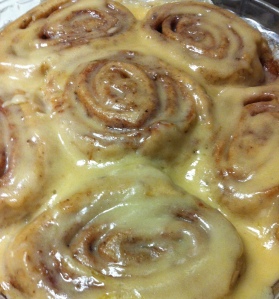 Directions
In a large bowl dissolve yeast in warmed nog.  Mix flax meal with water then mix it into yeast mixture. Add remaining dough ingredients except flour and mix well. Add flour one cup at a time until dough is no longer sticky. Lightly flour hands and begin kneading dough. Knead into a large ball. Keep in bowl, cover and let sit for at least an hour in a warm place (if your house is cool set in the oven-keep oven off) to allow dough to rise.

In a bowl mix sugar, cinnamon, and nutmeg. Add rum to melted butter.

Once dough has risen preheat oven to 400 degrees.  Roll dough out on a lightly floured surface until it is approximately 21″ by 16″ and approximately 1/4″ thick. For the filling spread the melted butter/rum over the entire surface of the dough with a pastry brush or the back of a spoon (reserve about a 1/4 of the mixture over the top of the rolls before ticking in the oven.)  Cover the buttered dough with the sugar mixture evenly.

Carefully roll dough starting on the bottom long end and roll all the way to the top. Cut roll  in  1 1/2″ slice and place on a baking sheet greased or covered with parchment paper. I used to 9″ rounds and made 12 rolls. Bake for approximately 14 minutes or until light golden brown.

While rolls are baking make icing. Beat cream cheese and butter well with an electric mixer until well blended. Add nog and maple syrup. Slowly add in powdered sugar. When rolls are done and still hot,  generously add icing to each roll. Eat. A napkin and a glass of nog or chai nog.

This entry was posted in dessert. Bookmark the permalink.