Posted on March 10, 2011 by dontfearthevegan 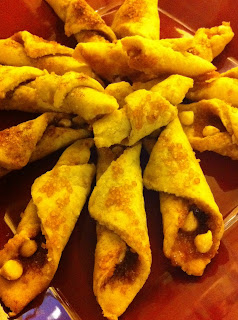 We love the public library. On our weekly trips our bag is always the same…Felipe and his music or books on political stuff, Anzia’s pile of kids books and my cookbooks.  On a recent trip that I didn’t go on I asked Felipe to pick out three random cookbooks for me to read.  One of them was called The Jewish Heritage Cookbook.  He picked it out so that I could connect with my recently discovered Jewish ancestry.  Reading through it I found a recipe for Rugelach which is a tasty little rolled up cookie that we fell in love with when we lived walking distance from an amazing Kosher bakery in Los Angeles.

The recipe called for eggs, butter and farmer’s cheese.  I also learned that traditionally these cookies were filled with walnuts, golden raisins and cinnamon.  We modified the recipe to our vegan liking. The little vegan chose the ingredients but the options are endless so feel free to fill them with whatever sounds good to you. They are relatively easy to make and my measurements for the filling may be slightly off because I let Anzia do it and she was as consistent as a 7 year old can be.  Though I will say the cookies where she piled on the ingredients were even tastier.  Warning:  You may want to make a double batch.  These only last 10 minutes at our house!

Dough:
With an electric mixer, blend Earth Balance and cashew cream.  Add applesauce and brown sugar.  Mix until well blended.  Slowly stir in flour by hand until you are able to knead it by hand.  You need enough flour to so the dough is a consistency that it can be rolled out. You may need extra flour.   Form the dough into a ball and refrigerate for a minimum of two hours.

Making the cookies:
When you are ready to start making the cookies preheat the oven to 350 Degrees.  Line cookie sheets with parchment paper.  Melt Earth Balance for filling.  Mix cinnamon and raw sugar with a fork. Separate dough into four equal sections. Roll a section at a time keeping remaining dough in fridge so that it doesn’t get too soft.  The original recipe said to roll into a round 1/2 inch thick.  I am not that skilled so we rolled it to a half inch and used a bowl to make the circle.  Then cut into four or eight equal triangles depending on how big of a cookie you want.  We did both.  Brush each triangle with melted Earth Balance.  Cover each triangle with cinnamon and sugar.  On wide end put a line of white chocolate.  We used 5 for the big ones and 3 for the small.  Begin to roll from white chocolate end to small end.  Place on cookie sheets.  Continue with remaining dough. Brush tops of rolls with more Earth Balance and sprinkle more cinnamon and sugar on top.  Bake for about 20 minutes.  They change color slightly.  Move to cooling rack and let cool at least 5 minutes.