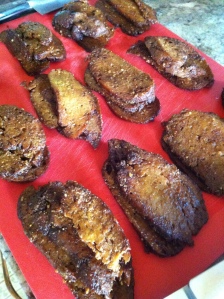 A few years back my parents moved to Oregon and introduced us to a vegan cafe in Portland called the Red and Black Cafe. This little cafe 300 miles from our house had the best vegan Reuben sandwich we ever had. Being as it was a little too far for us to go when we were having cravings I began searching the web for recipes on how to make my own. This was the beginning.

While researching for vegan corned beef recipes I found Vegan Dad. Prior to this moment I had never read a food blog nor considered having my own. Vegan Dad had a recipe for corned beef that I tried. The recipe was really good but not quite what I was going for so I started playing around until I came up with the recipe I currently have. I began making larger batches and handing them out to my vegan friends. Word got out and omnivore friends were interested and had to try it. From there, I experimented with making a carne asada and gyro meat with great success.

Bacon had never been a consideration. There are so many options on the market and just about every vegan I know has their own recipe, including us, and our staple tofu bacon. Then one morning my thoughts on the matter changed. I had created an amazing (if I do say so myself) fake egg muffin out of tofu and thought it needed bacon but the idea of having a tofu egg topped with tofu bacon seemed like way to much frickin’ tofu! This is how the bacon came to be. The next day I began experimenting and came up with the best bacon I had ever had. And I wasn’t alone, I handed the stuff out and it was like crack. People couldn’t get enough.

Friends both vegan and not wanted more and wanted to know how they could buy it. This motivated hubby and I to start looking into what it would take to start producing and selling. We also started saving money. At the same time a friend who knew what we were trying to accomplish was interested in investing in the project. After months of attempting to work out the offer we realized that at the end of the day we weren’t comfortable with a non-vegan who didn’t buy into our philosophy, owning half our company.

We still have half the funds to get things started and have gone to Kickstarter in attempt to raise the rest. We love the idea of helping community and have donated to many Kickstarter projects Vegan and/or local. We also figured this is a great way to see if there is really a want or need in the market place for our product.

One may wonder what background we have to run our own business. Phillip (aka hubby) has a background in the music industry managing both recording studios and co-running an independent record label that sold 200,000 CDs worldwide out of our living room. I (Steffi) have spent the last ten years in the retail food industry, the last seven in a managerial position.  Between the two of us we know how to sell (especially food), promote and manage money.

Our ultimate goal once things are rolling is to grow making more jobs available for the vegan community while offering good tasting, quality made seitans for all to enjoy.  We would  love if you could help us out either by contributing or spreading the word. We figure if ever person who has enjoyed the blog could give $5 we would be really close to reaching our goal.

To see our kickstarter page, where you may learn about our gifts and donate click here:

DFV Foods – A Line of Seitan

Also, if you are in the Seattle area and would like to try the seitan please email us at dontfearthevegan@yahoo.com. Sorry we can’t afford to ship it at this time.

Thanks for your time,

1 Response to Our Seitan Journey