Posted on September 26, 2013 by dontfearthevegan

Yes, once again I have not lived up to my own expectations with Vegan MOFO this year. I really thought I had it together until the big move happened, which led to unpacking the kitchen and getting WiFi.

The happy news is that I finally found all my kitchen gear (geez, I am pretty sure I am a kitchen gadget hoarder) and we should have WiFi today! Sad news is that I completely broke my diet during the move, which oddly enough has left my injured shoulder in a lot of pain. This is only note worthy because four days into the diet, the pain was gone.

Since I haven’t made anything I decided to share my new favorite store bought deliciousness. Earth Cafe out of Laguna Niguel, CA makes raw cheesecake. I especially like the fact that even though it is made with coconut, it is not the the first thing you taste. We have tried the blueberry, carob and raspberry. Raspberry is my favorite! 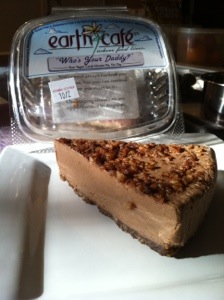 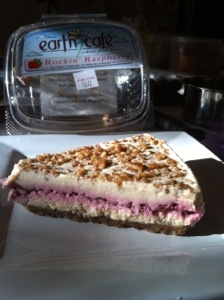 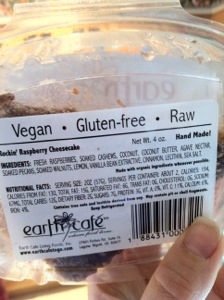